Ownership of the Wroxton manor is recorded as far back as 1089 when it was held by Guy de Reinbeudcurt, Lord of Chipping Warden. Michael Belet, a tenant at Wroxton founded an Augustinian priory in honour of St Mary in 1216.

When the priory was dissolved in 1536, it had twenty tenants and held almost all the lands in the parish of Wroxton and Balscot.

Following the dissolution of the monasteries under Henry VIII, in 1537, Sir Thomas Pope the treasurer of Henry VIII’s Court of Augmentations, purchased the lease to the lands and the monastic remains. The only part of the priory which still survives is the archway which can be found in the Abbey basement. 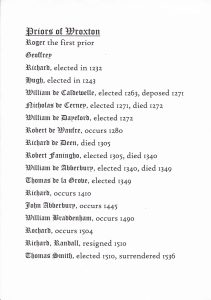