In 1948, the Wroxton Abbey lease was given to Lady Pearson. Lady Pearson had been born into an aristocratic family – the Page Crofts and married the industrialist, Sir Edward Pearson. Sir Edward died in 1925 so Lady Pearson had been a widow for 23 years by the time she arrived in Wroxton. She rented out large flats in the building to half a dozen tenants and also opened the house to the public. Lady Pearson would regularly conduct personal guided tours round the building. Lunches and teas were served in the restaurant created in the south wing. The maintenance of the building however became too costly for Lady Pearson, and in 1963 at the age of eighty-three, she decided to move out. Trinity College, Oxford had owned the Abbey since the 1500s, but came to the decision that as the Abbey needed a tremendous amount of restoration, rather than find a new tenant, they would sell it outright. The Abbey and its fifty-six acres were subsequently sold to Fairleigh Dickinson University. The top picture is of the Oak Room, now the College Reading Room and would have formed part of Lady Pearson’s tour route. The bottom pictures are advertisement notices for tours of the house and meals in the restaurant. 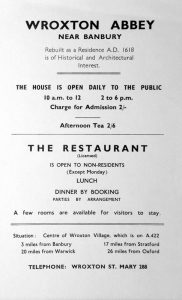 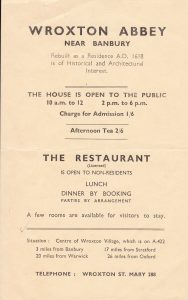